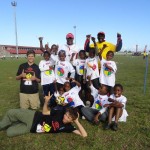 Tuesday 5th July 2011, was a day, a group of 30 students and teachers from Judge Memorial High School in Salt Lake City, Utah, USA will never forget as they spent the day with the Sporting Chance team in the townships around Cape Town.

The Sporting Chance team met the group early in the morning and took them to our Sporting Chance Development Foundation coaching clinic being held in Khayelitsha this week. The students and teachers got involved with the children, interacting and participating in the sports specific drills.

For many of the Judge Memorial students this was their first time playing rugby or netball and their enthusiasm and excitement while playing with the children was inspiring. Everyone got hands on involved chatting, playing and learning about these young children’s lives.

After hours of active fun, everyone gathered to say thank yous and the children showed their gratitude in their unique

way by singing a very emotional and sentiment rendition of Nkosi Sikelel’ iAfika.

The Judge Memorial group then rewarded the over 120 Khayelitsha children and coaches with a specially prepared lunch pack which they had made up with sandwiches, juice, fruit and treats.

From the coaching clinic the group and a selected number of children moved on to the KIA Street Soccer venue to play some Street Soccer. The Judge Memorial group and the Khayelitsha children were divided into eight different teams and a mini-tournament was organised. The matches were played in a wonderful spirit befitting the nature of the day and the USA students and youngsters certainly

The atmosphere gave you goose-bumps and the interaction was wonderful to see with many of the students saying this was a highlight of their trip.

“Who would have ever thought I would have the opportunity to play Street Soccer with South African children on the streets of their township. It’s just an incredible experience and one I will treasure forever!” commented one of the students having just completed his Street Soccer match.

After some competitive and impressive matches the day in Khayelitsha was brought to a close with a small prize giving with wonderful aluminium water bottles supplied as prizes by the Judge Memorial group.  The presentation also included a hand over of a monetary and kit donation for the Sporting Chance Development Foundation. The R 15 000 donation had been raised by the Judge Memorial students through various fund raising initiatives back home after they had identified Sporting Chance as an organisation they would like to support.

To end a memorable day the Sporting Chance team took the group to the infamous Mzoli’s in Gugulethu to experience SA’s finest bucket served meat and to really get a taste of SA culture and flavour.

As the sun was starting to set, the Sporting Chance team bid farewell to the Judge Memorial group and one of the comments made by a member of the teaching staff with linger long with us…

“I have been alive for over 50 years and I can honestly say that this ranks amongst one of the best days of my life, Thank You!”

donations and support of Sporting Chance.