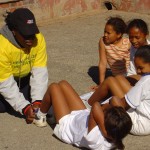 The Health of the Nation project was borne following the results of Sporting Chance’s Health of the Nation research tests, which were conducted from 2000 until 2004 in conjunction with the UCT/MRC Research Unit for Exercise Science at the Sports Science Institute of South Africa.  The results of the research revealed that South Africa was facing a huge problem promoting and implementing physical activity. The research also indicated that children from all backgrounds across the country, showed a tendency towards the onset of obesity, similar to that seen in developed countries more than a decade ago.

With these findings in mind and to highlight the importance of physical activity, Sporting Chance initiated the Kellogg’s Health of the Nation 50- 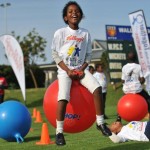 hour Sports Challenge in 2006. During the Challenge, children participating in the event keep a ball in motion for an uninterrupted 50 hours, to highlight the importance of physical activity in children’s lives.

Now, Six years on, the programme has grown exponentially and we are excited to confirm that we will reintroduce some of the initial research testing into this year’s project. The project is four phases:

Phase 1: In the build up to the 50 hour sports Challenge, Sporting Chance, in association with the National Department of Health and Kellogg’s dieticians, host health educational road shows in selected communities. These sessions address specific social concerns within communities including nutrition, how to lead an active life, prevent obesity and principles of personal hygiene.

Phase 2: Using the basis of the original Health of the Nation research tests conducted, Sporting Chance together with a team of exercise scientists will test all the challenge participants and in this way gather a database in order to compare the results collected over seven years ago. The tests will also look at BMI and cardio vascular risk. 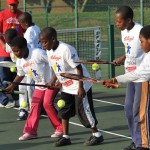 Phase 3: The sixth Kellogg’s Health of the Nation 50-hour Sports Challenge, in association with Sporting Chance, Virgin Active, Kia Charity and Care and Supersport Lets Play, kicks off in Cape Town in mid September before heading to Johannesburg to coincide with National Nutrition Week in October. Good Hope fm will be the radio partner in Cape Town with SAfm in Johannesburg.

Phase 4: The long term goal of the project is to implement school intervention programmes focused on the importance of physical activity and to show government the value of physical education in the school curriculum.

The 2011 Kellogg’s Health of the Nation 50-hour Sports Challenge has the support of the provincial and municipal Departments of Health, Basic Education and Sport & Recreation, in addition to celebrity health ambassadors, who will promote the project and further encourage healthy and 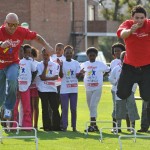