Twenty four teams, involving over 300 boys and girls from primary schools throughout the Northern Suburbs and Helderberg participated in the tournament, which has become a prestigious event on the junior hockey calendar.

The u13 format means it’s full field hockey, with made the Stellenbosch hockey complex abuzz with activity as matches were played on both the grass and astro turf fields. Teams played a series of round robin matches, before the play offs and finals being played under lights in front of hundreds of proud parents and spectators. 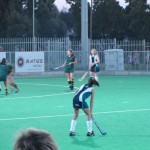 The matches were tightly contested from the first ‘hit off’ and it was a superb spectacle of hockey. After a busy afternoon it was Somerset House, Kenridge, Eversdal and Gene Louw in the girls semi finals and Monte Vista, Bastion, Kenridge and Somerset House in the boys. Two of the semi finals went down to ‘one on one’s’ with the keepers, which is a new format introduced to take the place of penalty flicks and provides excellent entertainment.

After some anxious filled moments the finalists were decided and it was Kenridge vs. Somerset House to contest the girls final and Kenridge vs. Monte Vista in the boys. The stage was set and the teams put on a great display of thrilling end-to-end hockey action.

At the final whistles it was both the Kenridge teams that emerged victorious achieving the much sought after ‘Double’ which made the host school very proud.

The evening was concluded with a prize giving that saw the individual winners and teams honoured with prizes. The winners and runners up received medals and trophies along with prizes from Sportsmans Warehouse.

The individual winners received awesome prizes from TK hockey and respective recipients were as follows:

Player of the tournament:

A welcome addition to the prize winners was the sportsmanship award which rewards a member from each team that is nominated by their coach. No players

went home empty handed as with the support of sponsors Flip File and BIC Sporting Chance gave each participant some products to take with them.

It was a wonderful occasion filled with fun competitive matches and was an excellent showpiece for Western Province schools hockey. Well done and thank you to the Kenridge staff for their outstanding organization and thanks to all the sponsors and spectators that supported the event.