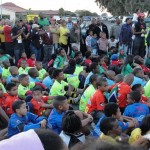 After an anxious wait the Western Cape KIA Street Soccer finals were hosted in perfect weather yesterday. Postponed last month due to rain, the teams put in extra practice over the winter school holidays to ensure they were sharp and ready for the penultimate day. The top two teams from each of the ten Western Cape KIA Street Soccer regions converged on the streets of Grassy Park to kick it out for the coveted title.

The Grassy Park community came out in their numbers and hosted the finals in supreme style. The Metro Police were sideline to ensure everyone was well looked after, while the large group of media buzzed around catching all of the action.

Before proceedings, special honour was paid to two significant women who recently passed away. Aunty Shirley from Manenberg was a long

serving member of the Sporting Chance team, and Mrs Abrahams who lived in the street which plays host to KIA Street Soccer in Grassy Park. They will long be missed and we thank them for their contribution to Sporting Chance and to the children of their community.

The twenty teams were divided into four pools of five, the format was demanding with only the top team in each pool progressing to the semi finals. The competitive spirit was evident from the first kick off and the each region was well represented by their boys and girls.

The matches were tightly contested throughout the afternoon with the players putting on a wonderful spectacle of this specially adapted version of the beautiful game. An esteemed line up of special guests made time in their busy schedules to offer their support, including MEC for Sport and Cultural Affairs in the Western Cape, Dr Ivan Meyer; Mayoral Committee Member for Community Services, Councillor Tandeka Gqada; SA cricket icon Herschelle Gibbs and former Bafana Bafana star, Thabo Mngomeni.

After tough round robin matches it was an all ‘township’ affair in the semi finals as Langa, Nyanga and both teams from Khayelitsha finished top of their respective pools. In hard fought semis with hundreds of supporters lining the pavements it was ‘team South Africa’ from Khayelitsha and ‘team Zimasa’ from Langa that emerged victorious and moved onto the final.

The stage was set… the lines were redrawn on the tar pitch, a new ball was supplied and the teams lined up opposite each other to shake hands.It 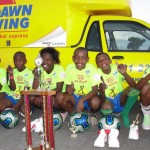 was end-to-end action for the twenty minutes and after a skilled battle it was Khayelitsha that won the dual claiming with it the 2011 Western Cape KIA Street Soccer trophy.

A fitting ceremony concluded the day with thank yous to the sponsors, and prizes from AJAX Cape Town and Sporting Chance been awarded to the winners. No participant however went home empty handed, as each player was delighted to receive a food pack and Let’s Play soccer ball.

fm roll out a neighbourhood street soccer programme in streets in and around Durban, Johannesburg, Tshwane, Cape Town and Port Elizabeth as part of FIFA’s Ticket Fund legacy. The KIA Street Soccer League was created as one of the tiers of the Ticket Fund initiative as a means of adding sustainability to the programme which has involved 4 500 boys and girls under the age of 13 and provided contractual employment for 800 coaches.

The Sporting Chance team look forward to evaluating the 2011 programme and planning the road ahead with sponsors for KIA Street Soccer in the future. Keep watching this space!