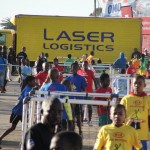 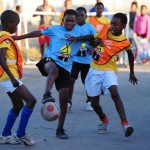 After months of KIA Street Soccer action, it all came to a close on Tuesday as the regional champions converged on the streets of New Brighton, Port Elizabeth to kick it out for the inaugural KIA Street Soccer Eastern Cape trophy.

Each of the five KIA Street Soccer regions were represented by their top two teams. Teams were divided into two pools with a series of round robin matches. Passionate soccer was watched by crowds of supporters who lined New Brighton’s Mbenge Street. Pleased to have the finals on home tar, the New Brighton community came out in full force to encourage their representatives.

Both pools were tightly contested from the start and as the ball rebounded off the pavement, walls and barbed wire fences some outstanding skills were on display. At the conclusion of the pool matches one team from four of the communities, namely Motherwell, New 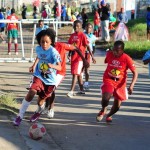 Brighton, Uitenhage and Veeplaas qualified for the semi finals.

The semi finals provided end-to-end action and the players extreme determination could only be admired. After full time in both semis the scores were tied, and so the adjacent street pitches were prepared for penalty shoot outs. 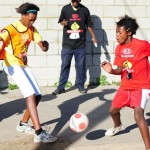 The epitome of nail biting… as three strikers and one keeper from each team were selected to step up to the mark. The pin point accuracy of the penalty kicks and the agility of the goalkeepers was phenomenal and both shoot outs had to go to sudden death to decide the winners.

In the end, it was the teams from Motherwell and Uitenhage that handled the pressure and snatched victory.  This laid a platform for an invigorating final in which Uitenhage showed the superior class despite Motherwell’s tenacity to score three unanswered goals. 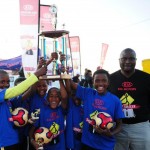 provincial final was a fitting climax to wrap up a successful launch of the programme into the Eastern Cape.

The Cape Town provincial final will take place in Grassy Park next month after it has been postponed this week due to inclement weather.

For more information contact Natalie Pollock at Sporting Chance on 021 683 7299, log onto www.sportingchance.co.za, or join facebook.com/sportingchance for regular updates.