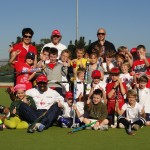 Over 250 young Sporting Chancers joined the coaching team on the fields this week to perfect their skills and get in the extra practice in preparation for the remainder of the sports season. With five venues running simultaneously with three sports codes: rugby, soccer and hockey and three age groups the Sporting Chance team have been hard at work.

The weather has been sublime and we couldn’t be more grateful to have had a warm week in the middle of July. Not sure if it’s climate change or just pure luck with the timing, but it certainly made the clinics run well with everyone enjoying the winter sunshine.

The Constantia venue has again proved popular with both the rugby and soccer clinics being well attended. Of particular interest was the

amount of players that come from the traditional Southern Schools that enjoy soccer and would like to see the sport being introduced into their school sports structure… we will have to watch that space.

Bellville and Somerset West venues have been busy with the three sports codes producing good results. Kelvin Grove was buzzing with activity as the soccer and rugby boys and girls were put through their paces.

clinic. The coaching team was phenomenal featuring a group of provincial and top level club players and SA women’s hockey player, Cindy Brown and SA u21 representative, Taylor Dart. To have a coaching team with such experience and hockey pedigree is fantastic and the skills certainly rubbed off on the eager participants.

SA cricket icon Herschelle Gibbs was once again passing on his expertise and incredible skills. His presence was well received by the young Sporting Chancers and their parents alike.

Many thanks to our Sporting Chance team of coaches and our sponsors Flip File, Sportsmans Warehouse, Second Skins, GM, BIC, TK hockey and SuperSport Let’s Play for their continued support.