Cricket season is upon us, and in true Sporting Chance style hundreds of children took part in the 27th annual Sporting Chance Calypso Cricket Festival, at the home of Calypso Cricket, Sunrise Beach, Muizenberg on Thursday 7th December 2017. We couldn’t have asked for better weather and with a full house of participants it made for a spectacular day! 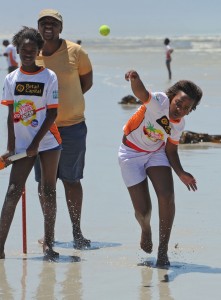 Borne from a desire to create a mass participation platform and introduce large numbers of kids to cricket while bringing together the various communities and cultures, The Sporting Chance Calypso Cricket Festival was started by founder of Sporting Chance, Brad Bing in 1990. The festival, in association with Taquanta Investments, Retail Capital, Maurits van Nierop Foundation and SuperSport Let’s Play with support from local Rotary Club of Signal Hill, HCI Foundation, BoldGear, Food Lovers Market and Peninsula Beverages is an annual highlight for hundreds of children who are transported to the beach, from various communities in the Western Cape including amongst others Langa, Khayelitsha, Manenberg, Ocean View and Masiphumelele, to pit their cricketing skills against one another.

Aside from a trip to the beach for many children who would otherwise not have this kind of opportunity, the festival highlights Sporting Chance’s determination to encourage sport and physical activity as a fixture in all children’s lives, irrespective of race, gender or social class and to create an uplifting environment for all involved. 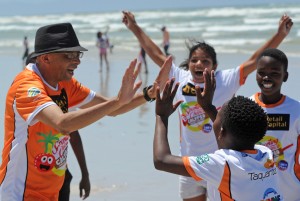 Following on from the Sporting Chance Street Cricket league that concluded last week, the Calypso Festival forms part of Cricket South Africa’s cricket pipeline and it’s exciting to present another platform that allows for raw and natural talent to be identified and nurtured. This year Calypso also partners with the Gary Kirsten Academy with their scouts joining us on the beach to assist to take the talent identified to the next level.

Current Proteas Test batsman Themba Bavuma participated in the programme as a youngster as well as Titans bowler Malusi Siboto and Lions batsman Nono Pongolo.  Since then, the Calypso Cricket Festival has continued to identify natural talent and has facilitated the opportunity for hundreds of players to go on to play club and provincial cricket at various levels.

Included as a part of the Calypso objective is the Sporting Chance Foundation Talent ID Bursary Programme which sees young men and women identified through their performances at the Sporting Chance events receiving secondary education opportunities at top schools.

Calypso Cricket is a unique and fun adaptation of the conventional game originating from the West Indies. Employing most of the rules of cricket, it’s played on the beach between two teams of ten players each. It’s all about bouncing the ball off the water, hitting the ball hard, sand sliding fielding and taking diving catches – while dodging waves and making new friends in the process.

We are very proud of the past 27 years and look forward to continuing to make an impact through the Calypso Cricket programme. Thanks so much to all our partners that helped make this year’s Calypso Cricket festival one of our best yet!

We have some articles to follow that detail all our “Cogs that make Calypso work!”…